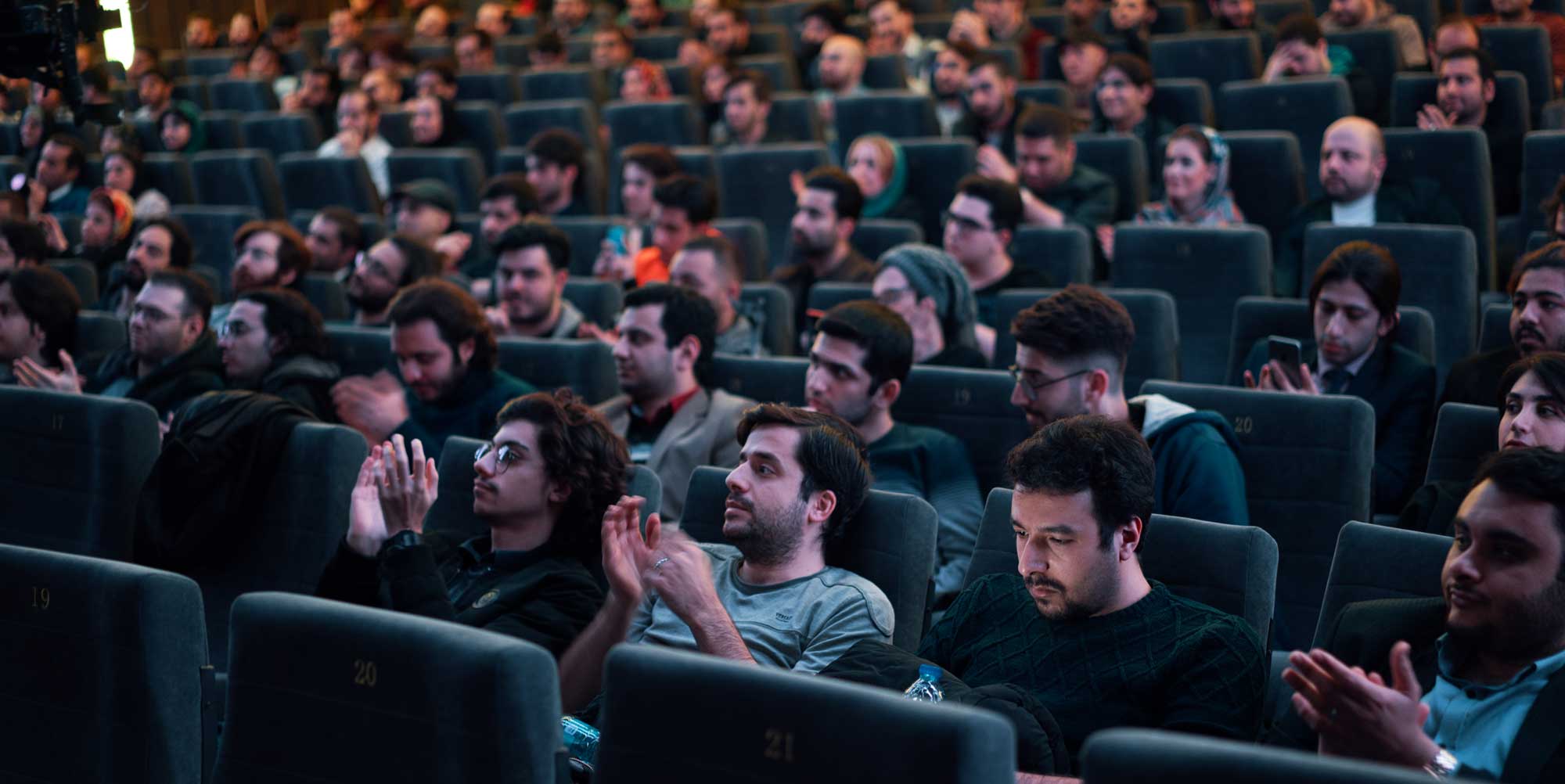 Sourena Games came to its own convention packed with content. Aside from releasing financial statistics, the studio had many surprise releases. The event started with Hassan Mehdiasl, CEO of sourena entertainments, who stated that the reason for this event was to display unity and strength in the Iranian game industry.

The event served to celebrate every team and key figure involved in expanding Iran’s video game industry, H. Mehdiasl continued to express much optimism in the future of Iran’s game industry. He then asked Emad Rahmani, CEO of Resana Shokoh Kavir, to reveal their next title: Petra: Legend of the Fate Guardians. 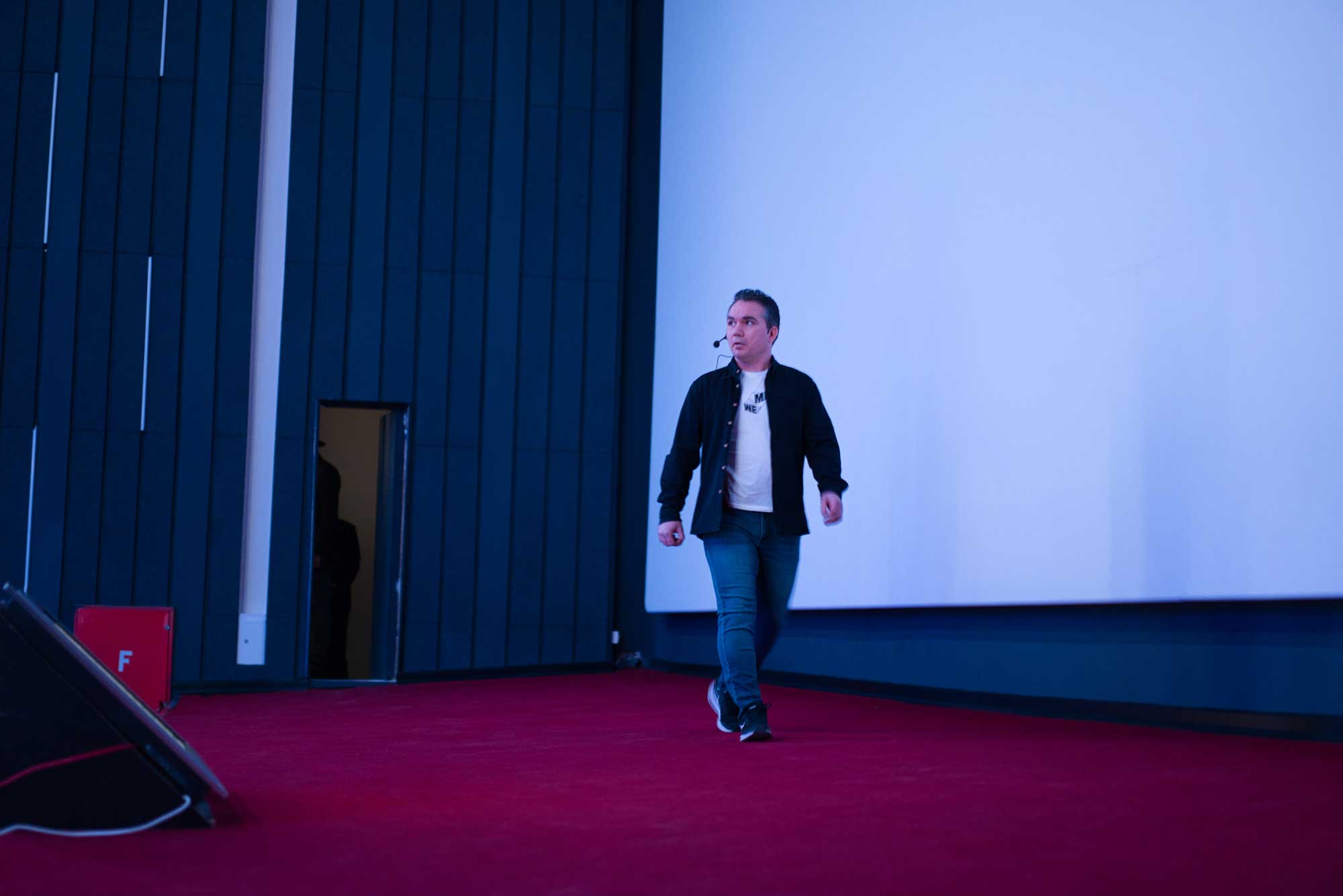 The game revolves around the lost city of Petra in Jordan, the population of which mysteriously vanished. Resana Shokoh Kavir is trying to depict a fictional account of what may have happened.

This hack and slash title challenges the player’s swordsmanship, sports a massive world and sandbox elements to it. The development of this game began a year ago using Unreal Engine 4 and there will be more news regarding the target platforms soon. 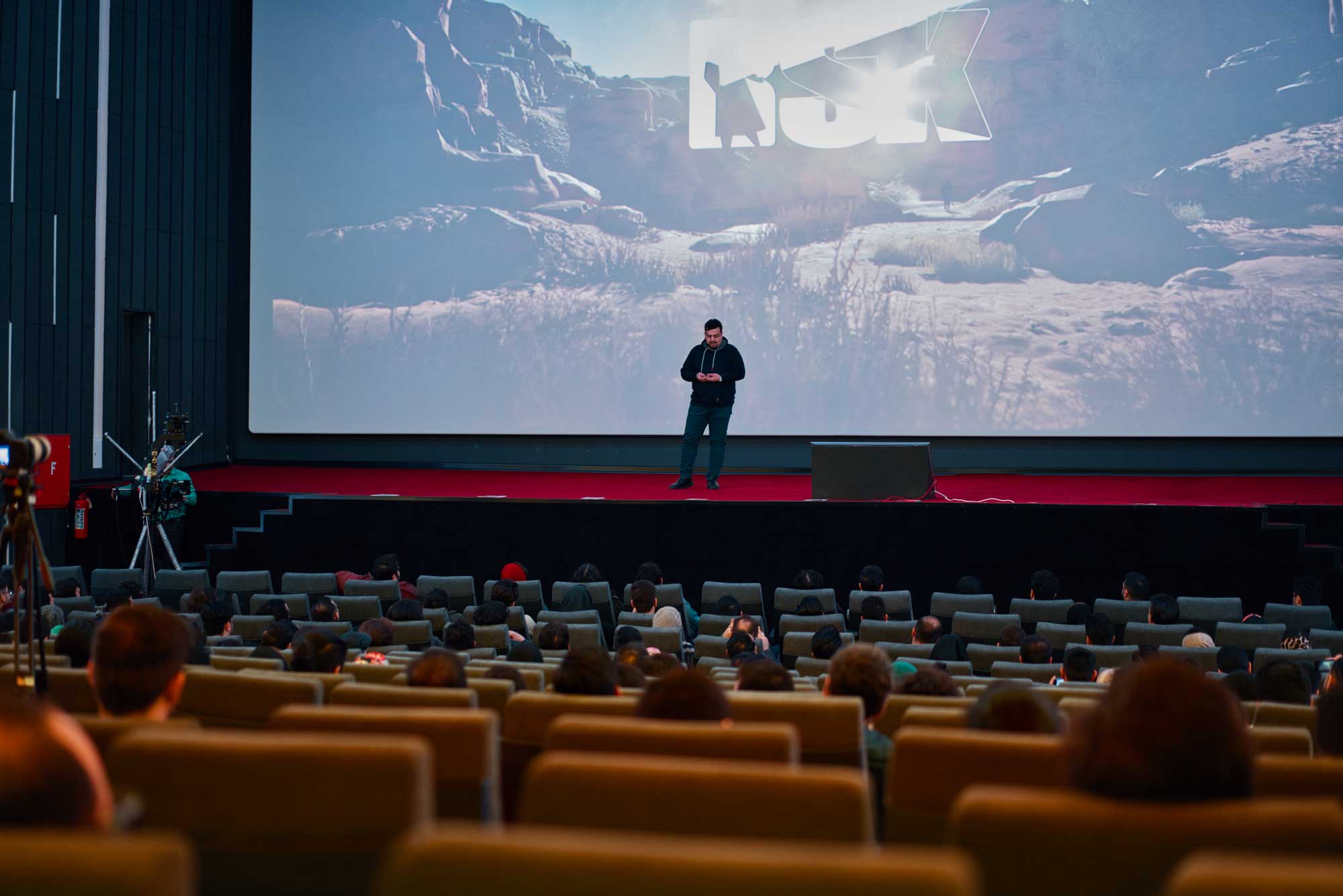 The event followed with the golden goose of Sourena Games, What Happened. The project that has been in development by Sourena games and the Genius Slackers studio for three years. Mr. Mahdiasl spoke of the project as one of the most special and ambitious games produced in Iran. The game boasts a gameplay time of about 7 – 8 hours. It is also translated into 10 different languages and the localization is almost finished. Currently the project is in the final stages. The PC version of the game will be released in the next spring or summer, the PlayStation 4 and Xbox versions will be released by Sourena Games next fall.

Afterwards, Arash negahban, the game’s director, stepped on the stage and talked about the ambitions and goals of the development team creating this game. He pointed out that this game is all about the challenges of teenagers who are at a particular stage of their lives and are in need of assistance. According to A.Negahban’s speech, this game can aid people understand and help these teenagers. Arash Negahban talked about the convenient possibilities of Unreal Engine 4 for developing the game . At the end, he thanked the members of Genius Slackers for their efforts and Sourena Games for supporting the project.

Jahangiri spoke of the endless efforts of the Zula team around the user support and problem resolving. He announced that last year 82,539 support tickets were registered by users, all of which were resolved by the support team.

Jahangiri went on with the statistics of the Zula championship organized before. Since the spring of 2017, the start of Zula championship, a total of 14,083 people forming 1431 teams, competed in the tournament. By reaching the first position in the 2017 league, Oxin team will be sent to the Zula’s World Cup in 2020. Current year’s league is at its final stages, and the finals will take place in march, where the top eight teams will compete for the 50 million prize and the Turkish Grand cup, which will be held in the spring of 2020. 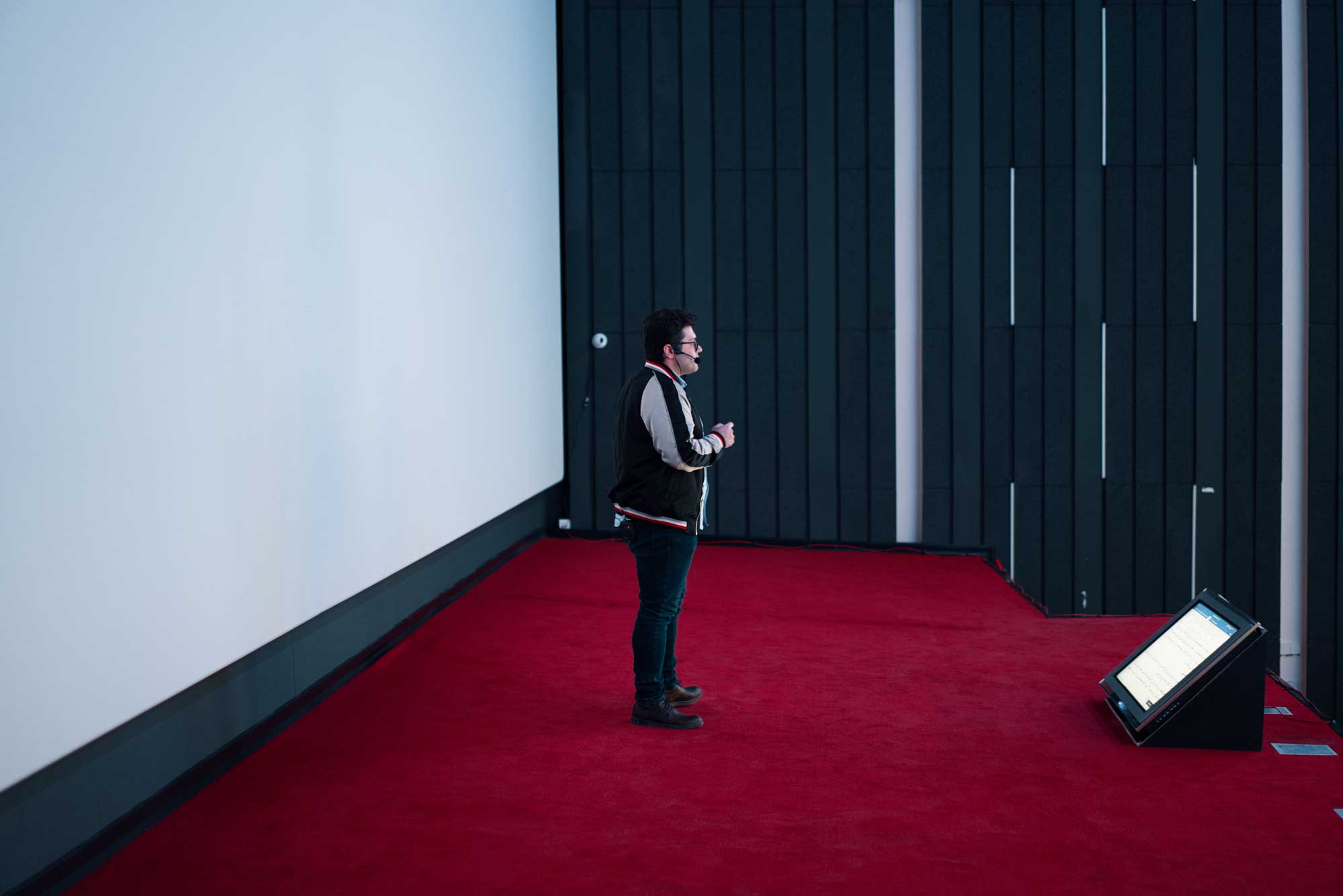 Jahangiri declared that in the last two years, a total of 28000 Dollars has been awarded to the winning individuals and teams, of which 8000 Dollars belong to the 2019 league. Currently a fully equipped game center is established by Sourena Games. Because of this centre’s great infrastructures and facilities, all Zula matches are and will be taking place there. According to Jahangiri, E-sports will be a lot more serious after these tournaments in Iran.

Jahangfiri also spoke of various updates in the last two years; Ten large updates such as Persepolis and Tehran map, and Iranian weapons like Fateh, Shaher and Khyber developed by Sourena Games. A season pass was also available this summer. Using this pass, Zula players can obtain the designed prizes by performing various contracts and missions. The new chapter, which is dedicated to nowruz, is named Hakhamaneshi, and is currently in the production process. Items in this chapter have been designed inspired by Achemenid patterns to fit best in Iranian culture. This content is to be made available to play in other parts of the world.

After Mr.Jahangiri left the stage, a mobile version of the game Zula unveiled, which more information will be available in the future. After teaser casting, Mr.Mehdiasl stepped onto the stage again, and there came the second surprise, Desolation point. The game was Introduced by a teaser, and then Mr. Mehdiasl made the most of the details. The DP is a shooter game in the battle Royal style, which is in development for a year and a half, and the developer team hopes to publish a beta version by next year.

Mr. Mehdiasl discussed the main challenges of the developer team such as backend processes, user profile design, matchmaking, inventory, and other infrastructure sectors. The developing team has recently focused on graphics and gameplay, and in the upcoming months, we will have more news and videos from the game. The game is being developed using Unreal Engine 4. The design team intends to implement innovations in the battle Royal Style, particularly in the customizing section of the firearms and E-sports. It is scheduled to be released for PC, PlayStation 4, and Xbox platforms, and a mobile version will also be available.

In the following, Hassan Chenari, the Art Director of the game, came to speak about the process of developing DP and their challenges. He claimed that in this project you can expect the highest visual quality in environments, design and ambient graphics among the Iranian and even regional games. Finally he thanked the members of the Sourena Games and expressed his hope for the future revival of pc gaming in Iran. 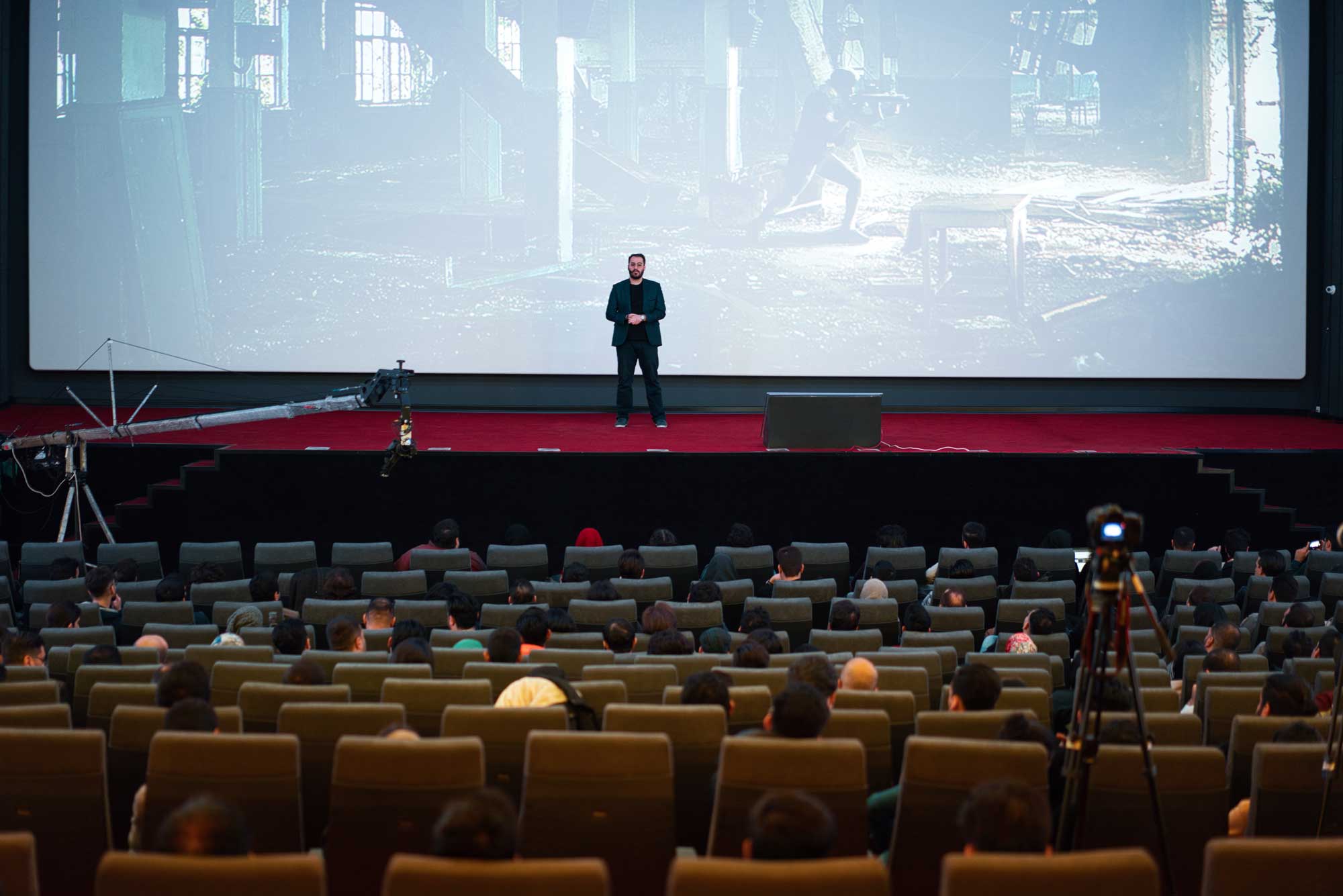 Mr.Mahdiasl stepped on the stage again to speak about the last subject of the Sourena Games convention. A very different project of every activity that Sourena games has done in the last 13 years; a project that is leading to a media called “Sargarme“. After that, Danial Nowruzi, Sargarme media director came to the scene to speak about the project.

Sargarme media, as the name suggests, focuses on different parts of the entertainment world, including video games, movies, TV, comics and technology. Development of this project started a year ago and it was finally implemented recently. Although Sargarme media is a part of Sourena Games, it will be independent in the content and press practice and will be totally unwarranted in speech and behavioral policies.

A flexible modular system that gives the team a great deal of freedom to implement new features and diverse capabilities is used to design the Sargarme site. The site is embedded with a dashboard system through which the user can use to follow up their interests. The entertainment team is trying to produce original content, and for this reason, it has the least dependence on external articles. The Sargarme site is not limited to the news of foreign sites, it also covers the content, interviews and other exclusive reports of Iranian media.

Video content is one of the most important aspects of Sargarme, and since its launch you can watch 4 shows there exclusively: Check Point, Check Point Plus, Let’s Play and VR Nights. Except for the exclusive items, the Sargarme team has worked with some of the active people in various fields. It is based on interviews with known game developers all around the world. And also a cinema podcast, which is performed by “Hamid Reza Nikoofar”, composer, media activist and game developer of a series of Saint Row levels in Arno Azar. And another show called the PH talk hosted by Amirhossein Mahboubi, nicknamed Amir Phantom, one of the most successful Dota 2 players in Iran.

The next guest was Mr Ramtin Aliyar, one of the best known and professional Dungeons and Dragons Dungeons Masters. The purpose of this collaboration is to produce articles, instructional materials, rules and videos about D&D for fans, so they can have a full game reference.

At the end Mr.Nowruzi, hopefully with the aid of the audience, expects to make Sargarme media stronger and better every day, and become a complete and unbiased media outlet.

Mr. Mehdiasl came to the stage at the end of the convention and congratulated on the introduction of entertainment media, thanking all guests for attending the convention. So that the first session of the Sourena games convention came to an end.